Bolsonaro’s illegal slush-fund financed social media campaign appears too sophisticated for his tiny political party to be doing on its own.

On the Friday before the October 7 Brazilian presidential elections, Brasil Wire ran two articles that proved to be prophetic. In the first I warned that the integrity of the election was being compromised by presidential candidate Jair Bolsonaro’s use of thousands of WhatsApp groups of 256 people each to spread hate speech, lies and character assassination against PT presidential candidate Fernando Haddad and his running mate Manuela D’Àvila. In the second article Marcelo Zero spoke about how international intelligence agencies use the internet to disseminate false information and destroy the reputation of their targets. “this isn’t just any type of information,” he said, “the information is chosen to cause great emotional impact, not to promote debate or rebut concrete information.” Zero argued that, due to the previously disorganized nature of Bolsonaro’s tiny PSL party, it was fair to assume that support for his social media campaign was coming from foreign intelligence agencies.

On October 7th Bolsonaro outperformed all predictions by a wide margin and came close to winning the election in the first round. The previously unimportant PSL party gained 44 new congressional seats and passed up Brazil’s big three conservative political parties, DEM, MDB and PSDB to become the second most powerful party in the House of Representatives. Then, on October 18th, a bomb dropped. Folha de São Paulo reporter Patricia Campos Mello revealed that a group of business elites had helped the Bolsonaro campaign create an illegal slush fund worth several times more than his official campaign fund. This money was channeled into 4 companies that sold private information and phone numbers of huge groups of WhatsApp users and helped them target specific segments of the population, like evangelical Christians and North-easterners, with a non-stop barrage of lies and misinformation which was planned to greatly intensify the week before the final elections. As Ms. Mello received death threats from Bolsonaro supporters, the Brazilian Federal Police launched an investigation and the Supreme Electoral Court, which has already violated Brazilian laws by refusing to let Lula run for president or speak to the press, announced that it too would investigate the issue. The Court postponed its first press conference and it is now expected that, with the support of Brazil’s most powerful man, General Sergio Etchegoyen, it will disobey Brazilian law once again and refuse to bar Bolsonaro’s candidacy.

But how could a medium like WhatsApp be used so effectively to propel a politician who, before Lula’s candidacy was barred, had support levels hovering in the mid teens? Here are a few examples of the illegal campaign of lies and slander his organization used to bombard the Brazilian people, with the apparent support of Steve Bannon.

A photo-shopped image of Vice Presidential candidate Manuela D’Ávila in a T-shirt that reads, “Jesus is a Transvestite”. 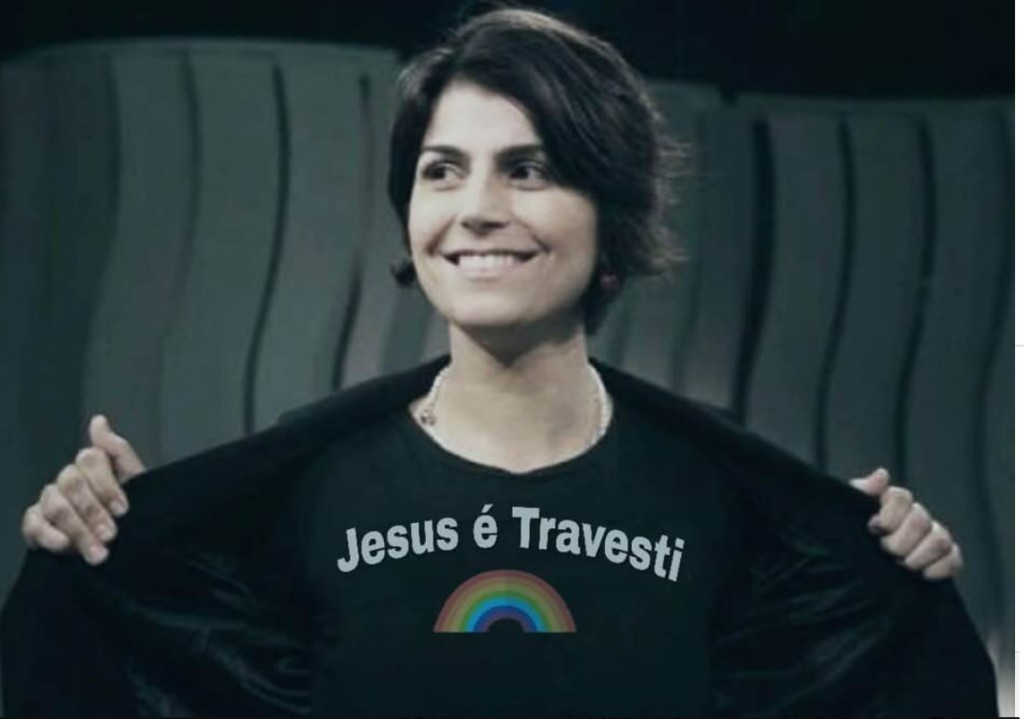 D’Ávila was actually wearing a T-shirt that said, “fight like a girl”. 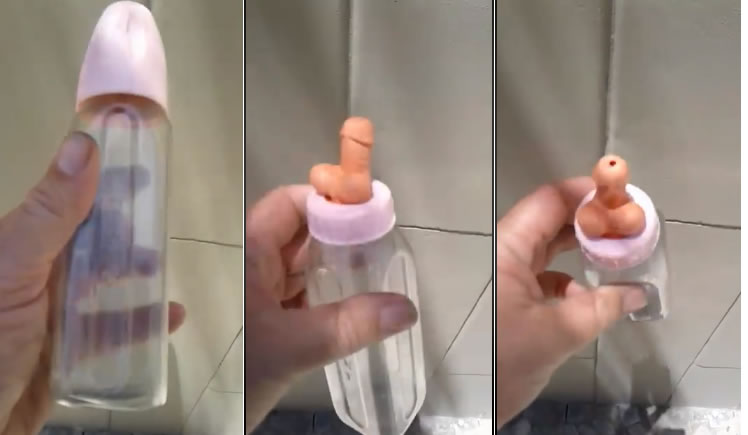 As over 1 million people took to the streets in hundreds of Brazilian cities and 20 countries around the world in #Elenão #Nothim protests against the misogynist candidate, the Bolsonaro campaign bombarded millions of evangelical Christians with photos from earlier slutwalk (Marcha das Vadias) protests, spreading the misinformation that they were taken during #EleNão. This move caused a 5% rise of support for Bolsonaro in the polls, and polls show the spike was mainly caused by evangelical christian women. 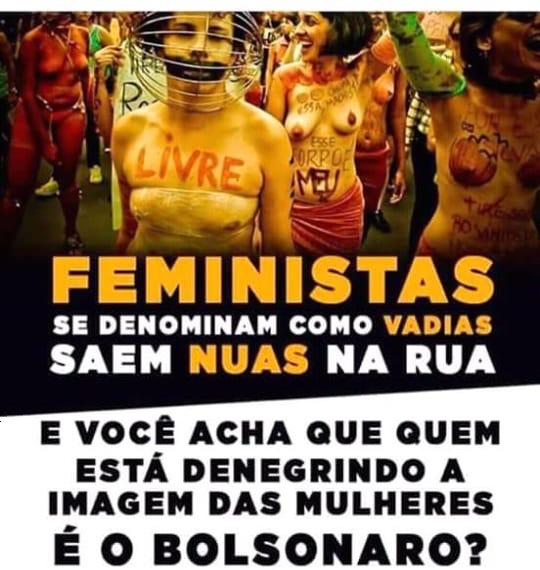 “Feminists call themselves sluts and go out naked in public. And you think Bolsonaro is the one denigrating the image of women?”

Throughout the campaign great effort has been made to apply the fascist tradition of myth building to bolster Bolsonaro’s image. The neofascist military dictatorship period is portrayed as a utopia, despite the fact that corruption was higher then than it is now, and only 60% of Brazilian children had access to the public school system. Bolsonaro is portrayed as a mythic hero – an outsider who is going to drain the swamp of the corrupt communists of the PT. This image shows a PT monster with Fernando Haddad’s face which also has the head of Michel Temer on it, and only a wounded Bolsonaro between it and the Brazilian people. Ironically, it was Bolsonaro who was one of Temer’s most vocal supporters during the coup of 2016, and he has voted with Temer’s coalition on every piece of legislation since then, including all of the deep austerity reforms. 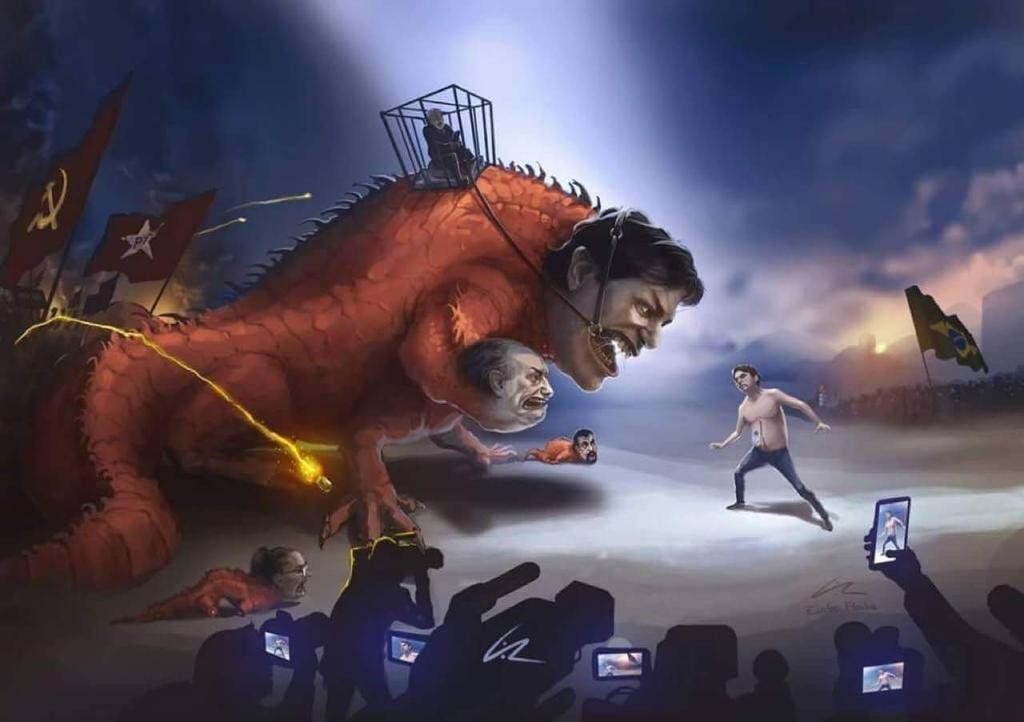 These four images are examples of the types of messages that have literally brainwashed a large segment of the Brazilian people into believing that Fernando Haddad is a communist, that the PT party will create a government commission to declare children’s gender when they reach the age of 5, and that the Military Dictatorship period was the most wonderful time in Brazilian history. Their use violates Brazilian laws against illegal campaign financing, dissemination of hate speech and slander. In a reaction to the first round election results and a recent New York Times editorial, Facebook company has already enacted a palliative measure of banning all WhatsApp groups over 20, which will cripple further efforts to expand this well-funded psyops operation. Much of the damage, however, has already been done, including the election of 51 members of Bolsonaro’s party to Congress, most of who are crypto-fascist, evangelical military officers, preachers and third rate celebrities, including former porno actor Alexandre Frota, who bragged about raping a black woman and leaving her unconscious on live national TV two years ago. If the Supreme Electoral Court refuses to act on this or stalls until after the elections, as many people believe will be the case, it will be one more ugly episode in the breakdown of the Brazilian rule of law since the 2016 coup.

We rely on reader support to maintain editorial independence